Amen Sela! Shabbat 65 By Ruth Lieberman One of the most famous coins in Talmudic times appears on our daf, Shabbat 65. The 'Sela' coin was based on the Roman system, similar to the Tyre tetradrachm, and was worth twice the value of the famed 'Shekel' coin - always minted in silver.  Half shekel of the Temple Tax Hoard of the minting year 4-5 CE.  At the time of the Jewish revolt against the Romans, the Tyrian mint stopped issuing silver shekels, yet they were still needed by the Jewish population of the time, for their annual temple tax of a half-shekel. The Jewish authorities of the time decided to mint their own version, a thicker one shekel, half and  quarter shekel coins. We have examples of these, from years One through Five of the Great Revolt, leading up to the destruction of the Temple in 70 CE. You'll notice the beautiful and very 'Jewish' symbols:  a rimmed chalice on one side and three pomegranates on the other. Ancient
Post a Comment
Read more
By Shulie - April 14, 2020 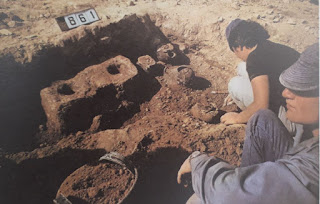 What’s Cookin’? Shabbat 38 What did our ancestors’ kitchens look like? What are all these terms thrown around in Shabbat and in Menachot: tanur תנור , kirah כירה , kupach קופח , furni פורני ? Are they at all parallel to the baking and cooling appliances we use today? To answer that question I looked at three sources: Zeev and Shmuel Safrai’s Mishnat Eretz Yisrael, Shmuel Avitzur’s encyclopedia of traditional tools אדם ועמלו , and Dr. Rafi Frankel’s comprehensive article on baking in Talmudic time (Catedra 2011, link at bottom of the post). Safrai tells us that unless you were very wealthy, no one in ancient times had a kitchen as we think of it. Not only was most of the preparing, baking and cooking done outside in the communal courtyard (everyone knows what is or isn’t in your pots!) but there rarely were surfaces to work on. The women would squat or sit on the floor and the baking and cooking “appliances” were on the floor too. Safrai gives a short description of a ta
Post a Comment
Read more
By Shulie - March 22, 2020 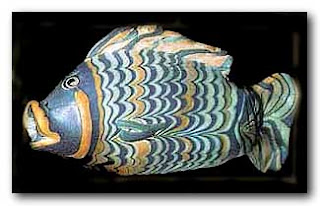 Shabbat 15-16 People Who Live in Glass Houses   These pages contain a discussion about at which historical point glass vessels were considered capable of becoming impure. The earliest option is the time of the zugot, Yosi Ben Yoezer and Yosi Ben Yochanan, 2 nd century BCE, then the suggestion is eighty years before the destruction of the Temple (late 1 st century BCE) and finally the time of Usha (2 nd century CE). We also hear about how glass is similar to and also different from both earthenware and metal vessels. So what do we know about glassmaking? Glass production started at least five thousand years ago in Mesopotamia. Egypt was an important center for it. As far as we know, glass was not manufactured in the land of Israel but glass objects were imported here. This glass was beautiful but not transparent or even translucent. Glass pieces from the manufacturing process were reused (important for our daf – glass can be fixed, i.e., made into a new vessel). For some
1 comment
Read more
By Shulie - March 12, 2020 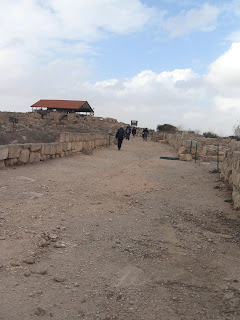 Shabbat 6 What Does Your Neighborhood Look Like? Masechet Shabbat has begun and with it a whole slew of new and complex concepts. We are talking about the reshuyot, the different areas where life is conducted. The most accessible to us are the public - reshut harabbim – and the private- reshut hayachid. But within those two as well as in addition are many other concepts. It may be helpful to examine some of the terms the Gemara uses and see what they looked like in the ancient world.   What is a reshut harabbim asks our daf.   The answers: a  סרטיא    seratia and a פלטיא   plateia, as well as thoroughfares that are open at both ends מבואות מפולשין . The open thoroughfare is easy enough to understand and if you have been to the ancient site of Susya in the southern Hebron Hills you have seen such a main street, with the passageways to courtyards branching off of it: (Wikimedia commons) But what of the other two terms? Rashi explains a סרטיא   as a highway: a ro
Post a Comment
Read more
By Shulie - August 18, 2017 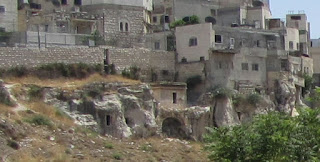 Sanhedrin 26 Move Along, Nothing Valuable Here In the context of a discussion about if one can trust witnesses who are known to be transgressors, the Gemara brings up the case of Shebna, steward to King Hezekiah. He is described as a brilliant scholar who commanded a larger audience for his Torah teachings than did the king. Therefore, when Sennacherib of Assyria advanced on Jerusalem, Shebna thought that the decision to surrender was in his hands, since he had the majority on his side. This was not the case and he ultimately tried to surrender to Sennacherib himself, with his followers. God planned it so that he was locked out of the city alone and Sennacherib thought he was making a fool of him. Therefore, he tortured and killed him. In the course of this story, the Gemara relates that Shebna was arrogant enough to build for himself a grave among the graves of the kings. The two parts of the story seem to be an attempt to explain the rather incongruous two parts of Isaiah cha
1 comment
Read more
By Shulie - September 12, 2016 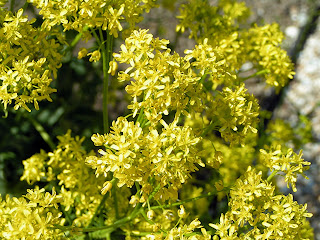 Bava Kama 101 The Rainbow Connection On our daf we have the seemingly strange question of if wool is dyed accidentally, or malevolently, are the wool and the dye two separate items or have they become one new item.  In either case, we ask how can we determine the value of the item(s) and who receives the payment for them. This leads us to the topic of dyes and dyeing – how was it done, what did it cost and other details. Dyeing is an ancient craft and was often a family business, with the trade secrets passed down from father to son. Jews were dyers in the time of the Mishna and continued in the trade through the Middle Ages and even into pre-modern times. When Benjamin of Tudela writes in the 12 th century about visiting Jewish communities all over the world, he often talks about the Jewish dyers. He tells us there were dyers in Jerusalem and the Ramban, a century later, mentions the same fact.  Even today, you can meet people with the family name of Sabag, which means dye
Post a Comment
Read more
By Shulie - June 29, 2016 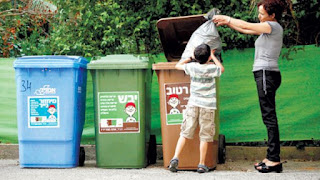 Take Out the Trash! Bava Kama 30 Today's daf (and previous ones) talk a lot about what public spaces looked like and what was allowed there. Today we discuss the specifics of throwing your garbage into the street as well as leaving it there to compost. What did ancient streets look like? Was there garbage collection? Seems like streets were pretty nasty places till very recently (the Ottoman Turks cleared away Jerusalem's garbage once a year) but a recent fascinating archaeological discovery suggests that Jerusalem actually had municipal garbage collection two thousand years ago. Here is the Haaretz article with certain relevant highlights bolded. Thanks Tzvi Bessin for the article! Today we are also advanced in our garbage collection   http://www.haaretz.com/jewish/ archaeology/.premium-1.727585     *Ha’aretz*   June 28, 2016 4:23 PM       *Archaeology*     *Ancient Romans, Jews Invented Trash Collection, Archaeology of Jerusalem Hints*     *Archaeologists digging u
Post a Comment
Read more
More posts